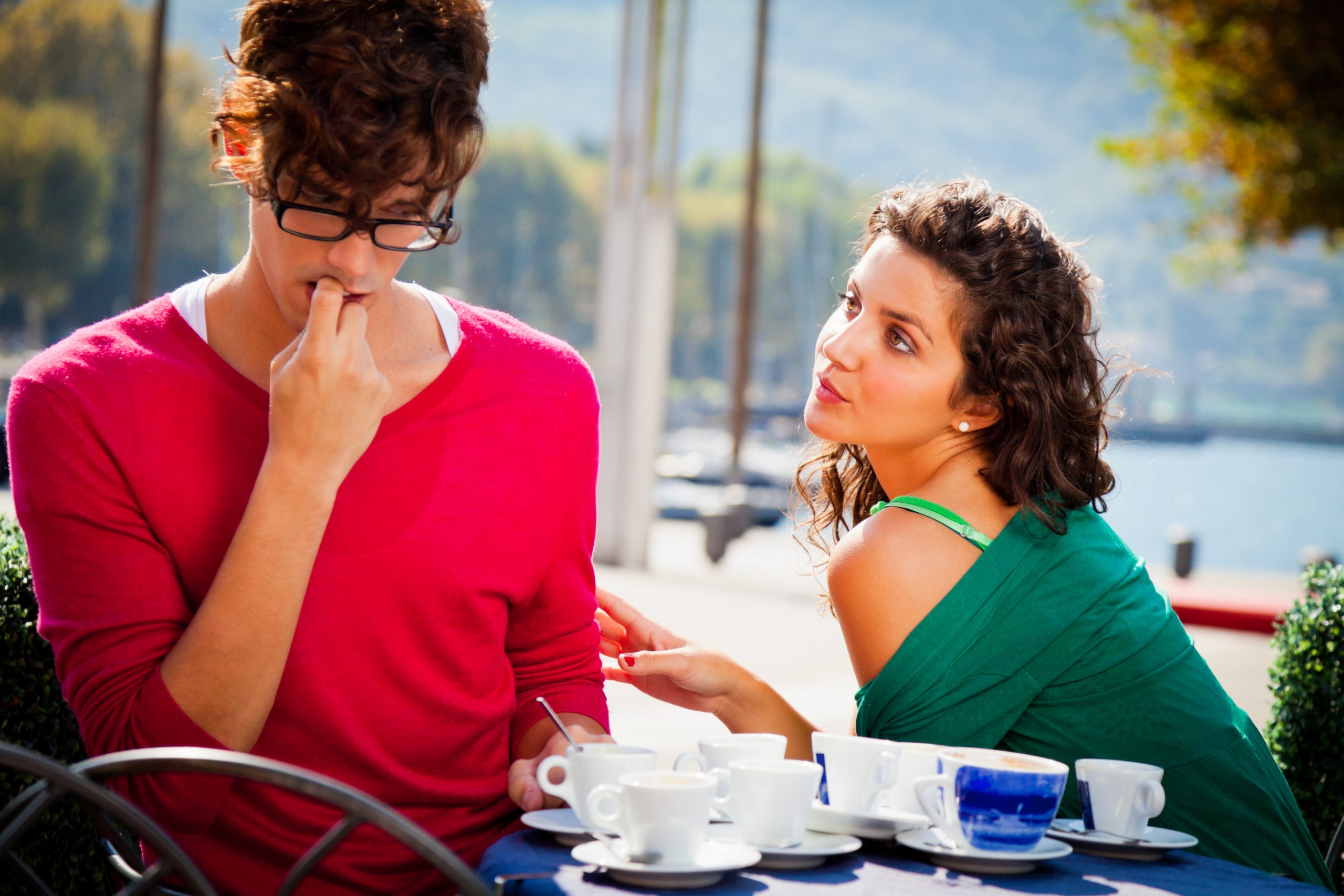 Many men aren’t used to a woman approaching them.

Applause to you for having the courage to go for it, but, there are some men who clamp up.

What is going on here?

Why did she introduce herself to me?

Does she work here?

What’s she playing at?

Is this a con?

With such a lack of experience in this department, many men start overthinking the moment.

All of a sudden, they are struggling to put a sentence together and start stumbling over their words.

His body stiffens and he begins to avert his eyes.

Understand, at this point in time, his mind is racing.

Not only is he asking himself a litany of questions about why this attractive woman has started a conversation with him at a department store completely out of nowhere, he is losing his bearings.

He had full control when he arrived here.

He knew what he needed to get and how long it would take him to finish what he had to do at this location.

Now, with your pretty face in his space, all that control is now out the window.

He has temporarily forgotten what he came here to do.

His schedule, that was so carefully laid out before he arrived here, is in flux in his mind.

Mentally, what he is going through at this moment harkens to being in a psychedelic trance, but without the euphoria.

This is why he is becoming so awkward.

This is why it is taking him a while to respond to what you just said, causing you to have to repeat yourself.

Finally, he gets his bearings.

His heart rate begins to decelerate.

He begins to get a better grasp of his bearings.

And there you are.

Finally, he is able to look you in the eye again.

You smile, doing your best to humanize yourself as best you can.

You repeat what you just said and he finally starts talking like someone who can actually put a sentence together.

You have seen this awkwardness before.

Why wouldn’t they have more confidence?

A point is approaching where you feel like approaching men you find attractive is going to be a thing of the past.

Not much good has really come from it anyway.

Most of the time, the conversations never bear our well enough for numbers to get exchanged.

The few times you have exchanged numbers, you have rarely gone on dates or had that much communication with the guy.

It was always one-sided, with you still having to take the initiative to contact him.

The few dates you have been on, only further showcased the awkwardness.

You would have thought he would have gotten over it by now, but there he is at the other end of the cafe table still looking like a little child lost in the market.

Sure enough, second dates don’t happen and conversation over the phone soon fizzles out.

With this bevy of disappointments, you are starting to wonder whether perhaps it’s time for you to just stop approaching men.

Your frustration is understandable, but you shouldn’t stop approaching men.

This would be putting yourself on the sidelines, handing yourself over to the uncertainty of fate, instead of taking charge of your love life and going after what you want.

The men who become awkward when you approach them aren’t used to women approaching them.

They are also shy.

Perhaps shy men are your thing.

Nothing wrong with that.

You just have to understand that since this is the type of man you are normally drawn to, you have to use a different approach from start to finish.

Stop looking at them as you have other men who have approached you in the past.

Men you weren’t interested in because they weren’t your type.

These were confident men who were very comfortable with conversation.

Perhaps a bit too comfortable.

It never takes long before they start flirting to an extent that turns you off.

So, it never goes anywhere.

You don’t want some guy that is just looking at you like he would a piece of meat, regardless of how confident and good at conversation he is.

Maybe that is why you keep finding yourself more drawn to the more withdrawn quiet types.

The ones who struggle to make conversation with women, especially women who approach them.

Their personalities are different from the more confident men who have stepped up to you in the past and your approach has to take this into consideration.

Shy men like these remain in their element when you allow them to maintain control of their environment.

Instead of approaching him and complimenting him about something in an attempt to open up a conversation with him, stick to something that is a lot more realistic and practical to him.

Although a compliment is normally a very effective tool in opening up a conversation with someone you have approached, it tends to backfire with shy men.

They aren’t used to receiving compliments from women.

When receiving one from you, it throws him off and makes him feel uneasy.

Instead of going this route, open up with something that keeps him in his element.

You noticed that he is holding an electronic device in his hand or carrying one in his cart that he is about to purchase, use that as your opener.

Ask him something in relation to it.

This is keeping him in his element.

He knows about this device. Probably everything there is to know about it.

You have given him something he can talk about with absolute confidence and certainty.

Keep most of your gaze on the device so as not to make him start feeling uneasy.

Making too much eye contact with a shy guy disorients him and you could start losing him.

You don’t want this.

So, keep the majority of your attention on the device that he is giving you information about.

He is so in his element at the moment.

If anything, he is feeling more confident.

Guys love showing their expertise in something. The more he talks about it, the more confident he feels.

Especially where he gets to aid such a pretty girl.

Don’t drag it out.

Once he has said enough, let him know you were thinking about getting one for yourself and if it would be alright to contact him for further help with it if you were to need it, as you are so bad with electronics and all.

He absolutely jumps at this opportunity, still feeling good about all the helpful information he had just aided you with.

This is how you get to exchange numbers.

You kept him in his element the whole time, allowing this moment to happen.

Follow this up by contacting him a few days later, letting him know you got the device and asking for his help as you try to use it or set it up.

When he has helped you, like the gentleman he is, be grateful.

This is where giving him a compliment actually has the best effect.

Tell him that you would love to thank him by buying him a drink or getting him lunch, something to that effect.

There is a much higher likelihood he agrees to a date when you go about it this way.

You have kept him in his element the whole time, from the store you approached him in to now.

In the process, he has been able to demonstrate how much of an expert he is in something which has bolstered his confidence.

This state of mind is what emboldens him, making him agree to the date.

Notwithstanding, he still feels some jitters when he arrives at the date, but once he sees you and you are quickly thanking him about how much he helped you, he is feeling confident again.

From here, the conversation at this date venue naturally segues to other topics.

He is feeling really good about himself and there is no sense of awkwardness coming from him at all.

Okay, this is clearly a process, but it really works with men like this.

Given that these are the types of men you tend to be drawn to, do it the next time you approach one of them in public.