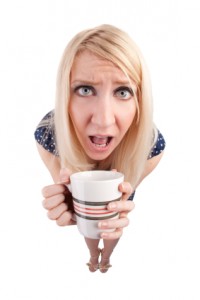 You just ask her for coffee. That is really it.

Avoid overthinking it because if you do, you will only end up talking yourself out of it. The more brief and clear you are about it, the better.

Some guys make the mistake of talking too much or starting with so much discussion before getting to the invite.

This can be dangerous because by talking too much before getting to the invite, you may be only building up your anxiety even more.

Hence, you may actually end up doing the opposite of what you were wanting.

In other words, you may judge your conversation with her.

You may watch how she responds and base whether you will invite her for coffee on that.

If she isn’t responding with a lot of enthusiasm to the conversation, you may tell yourself that you will take that as a hint not to ask her for coffee at this time.

On the other hand, if she is responding to the conversation with enthusiasm, you may initially be encouraged by this but you may still not take advantage of that moment to do the invite because you believe you still need to get her even more enthused.

At some point during the conversation, her energy may begin to wane all of a sudden and then you become discouraged.

As a result, you choose not to make the invite until perhaps the next time around when you can keep her at that heightened level of energy.

The point here is that, by focusing on so much conversation first, you may be setting yourself up to never actually make the invite for coffee.

You would be essentially approaching this in a defensive manner out of fear that she may not say yes to your invite. Hence, using this approach could actually work against you.

Also, by using this approach, you may get to the point where you have been talking so much about a particular topic that it would seem odd or awkward to suddenly change the topic to one of getting coffee together.

In essence, by using this approach, you may actually talk yourself into a corner.

You simply reach a point in the conversation where you feel like it has gone to an area that you just can’t navigate away from.

If you talk for too long and she has somewhere to go to, she may cut the conversation short at some point because she has to get to her meeting or wherever it is she needs to get to.

At that point, you would find it even more difficult to make the invite because she may seem hurried and you would feel awkward inviting her for coffee when she is trying to get somewhere fast.

Your best option is to just ask her for coffee as simply and quickly as you can.

Avoid the verbose conversation beforehand just so that you can build up the courage to do it.

All that does is make you keep wondering about what point you should do the asking and that can make you really nervous.

Just ask her to coffee and avoid all the embellishment.