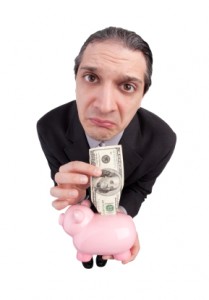 It is not so much that they get jealous. It is more so that they feel inappropriate with being in this particular predicament.

When a guy’s girlfriend is wealthier than he is, he may become insecure.

He may become insecure because he has been taught that it is supposed to be the other way around.

He believes that he is supposed to be the provider.

He should be the one who is bringing in the lion’s share of the wealth into the relationship.

This is what would fulfill his role as the man.

This is what makes him an alpha.

If his girlfriend were wealthier than he was or earned more at her job, he may get to a point where he feels like he is not the quintessential man in the relationship.

In essence, he may feel like he is not playing the guy role.

He is not the alpha.

This can hurt his sense of self-esteem.

This may make him feel inappropriate when he is talking about his girlfriend to others.

He may do everything in his power to omit the fact that she is wealthier than he is.

He does this because he wants to save face.

He doesn’t want to feel embarrassed.

After all, he is supposed to be the alpha in this relationship.

If other people were to discover that his girlfriend were wealthier or earned more than he did, he may feel humiliated.

He may feel judged.

This hurts his sense of masculinity and worth. Hence, he may start being mean to his girlfriend or act jealous.

He may try to make her feel bad for being wealthier.

He may try to find ways to make all of this negativity that he is feeling, her fault.

Thereby, you as his girlfriend start to get the feeling that he may be jealous.

However, he is merely reacting to a situation that makes him feel somewhat useless.

A big part of what makes a guy feel like he is a valuable member of society is in how he is looked at as a man.

Is he playing the role that society expects of him?

Is he being the provider?

Is he being the alpha?

He may start making assumptions on how your friends and family view him.

Being that you are wealthier, he may feel uncomfortable when he is around your friends and family.

He may begin to think about how they look at him as less than you.

Your friends and family may be thinking nothing of the sort.

However, he is so insecure about this.

This insecurity forces him to begin to draw his own conclusions.

He starts telling himself that your friends and family must think very lowly of him.

This in turn makes him detest you.

He doesn’t want to be seen as lowly. After all, he is the man in this relationship.

So, he lashes out at you. He makes snide comments or gets rude.

He tries to make you feel bad for being wealthier or earning more.

This has a lot more to do with his insecurities than it has to do with you.