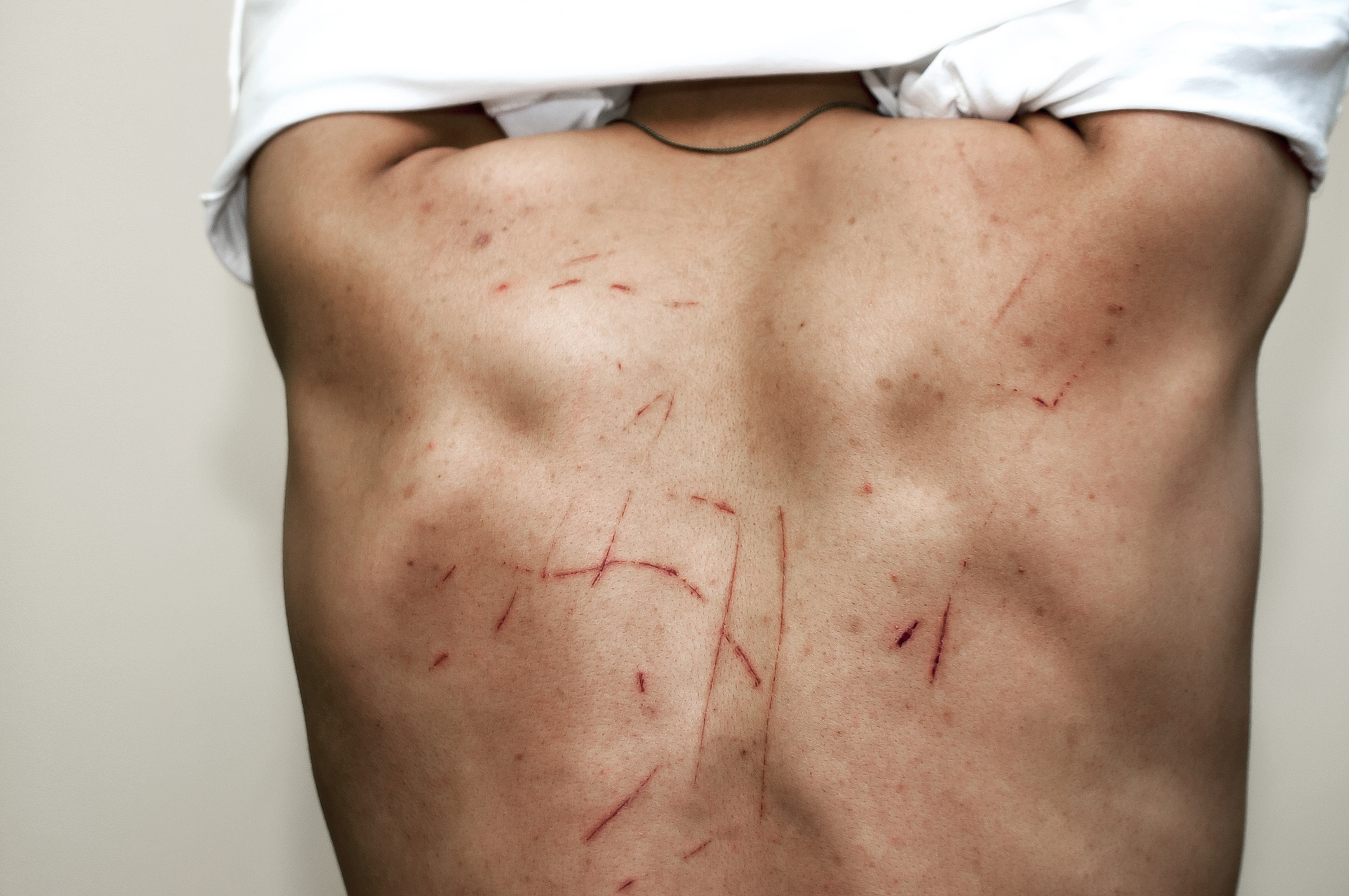 Some girls have reservations about scars.

On sight, they elicit discomfort.

Much of this has to do with the girl’s history with scars.

A girl with a history of dating guys without scars doesn’t want to be insensitive upon seeing your scars.

Depending on the volume and size of your scars, she either reacts visibly and quickly checks herself or is mute, but silently rattled.

It comes down to her level of self-control.

Neither reaction means she finds you unattractive.

A lack of history dating guys with scars has left her unsure of how to judge it.

As she figures it out mentally, her mind goes off on a tangent.

Scars are portrayed in the media as evil, ugly and bad.

Think about some of the most popular horror movies.

Movies like A Nightmare On Elm Street or Friday the 13th.

The antagonists have scars.

They shield them with a mask but the scars are there.

Growing up with these representations from the media, some girls connote scars to evil and bad.

They do so subconsciously when they are younger.

By the time they are grown, those perceptions have been embedded into their subconscious, making it that much harder for them to get rid of them.

Unsurprisingly, the girls whose minds go into a tangent about representations of scars in popular media, have unconsciously labeled scars as foreign and unattractive from a young age into adulthood.

Remember, it isn’t that your scars make you unattractive.

She isn’t judging you per se.

Her negative viewpoint on scars has a lot to do with what she has been made to believe scars represent, ever since her youth, thanks to popular media.

The challenge for these girls is to overcome what they have subconsciously believed scars to represent.

That’s how they get over the hump of finding scars unattractive.

The girls who have no reservations about scars, regardless of their size and volume, are the ones who weren’t affected psychologically by what they saw on screen growing up.

They look for a deeper meaning in a mate that goes beyond physical attraction.

These girls want to be stimulated mentally more so than physically.

This is how they are hardwired.

Then, there are the girls who are attracted to scars on a physical level.

Scars are visibly appealing to them.

Sometimes, these girls have scars of their own.

Discovering your scars makes them experience a kinship with you.

It gives you more depth and dimension, as they want to learn the stories behind your scars.

Scars don’t freak them out.

They had healthy conversations with family about their own scars growing up.

Some family members took it upon themselves to name some of their scars.

Regardless of the negativity in media, these girls sympathized with scarred antagonists.

Not that they wanted to date a Freddy Krueger from Nightmare on Elm Street or a Jason Voorhees from Friday the 13th, but they had a capacity to sympathize with some of these villains.

In the end though, your priority isn’t your scars.

It’s your personality and staying in good physical shape.

That is what attracts the right girls to you.

Don’t be obsessive about your scars.

Most girls are primarily impressed by your personality and confidence.

Focus on having a fun and enjoyable life, bereft of worry over your scars.

This is what attracts girls into your life, regardless of your scars.

As a confident guy who shows no insecurities about your scars, you won’t have a hard time attracting the right girls into your life.