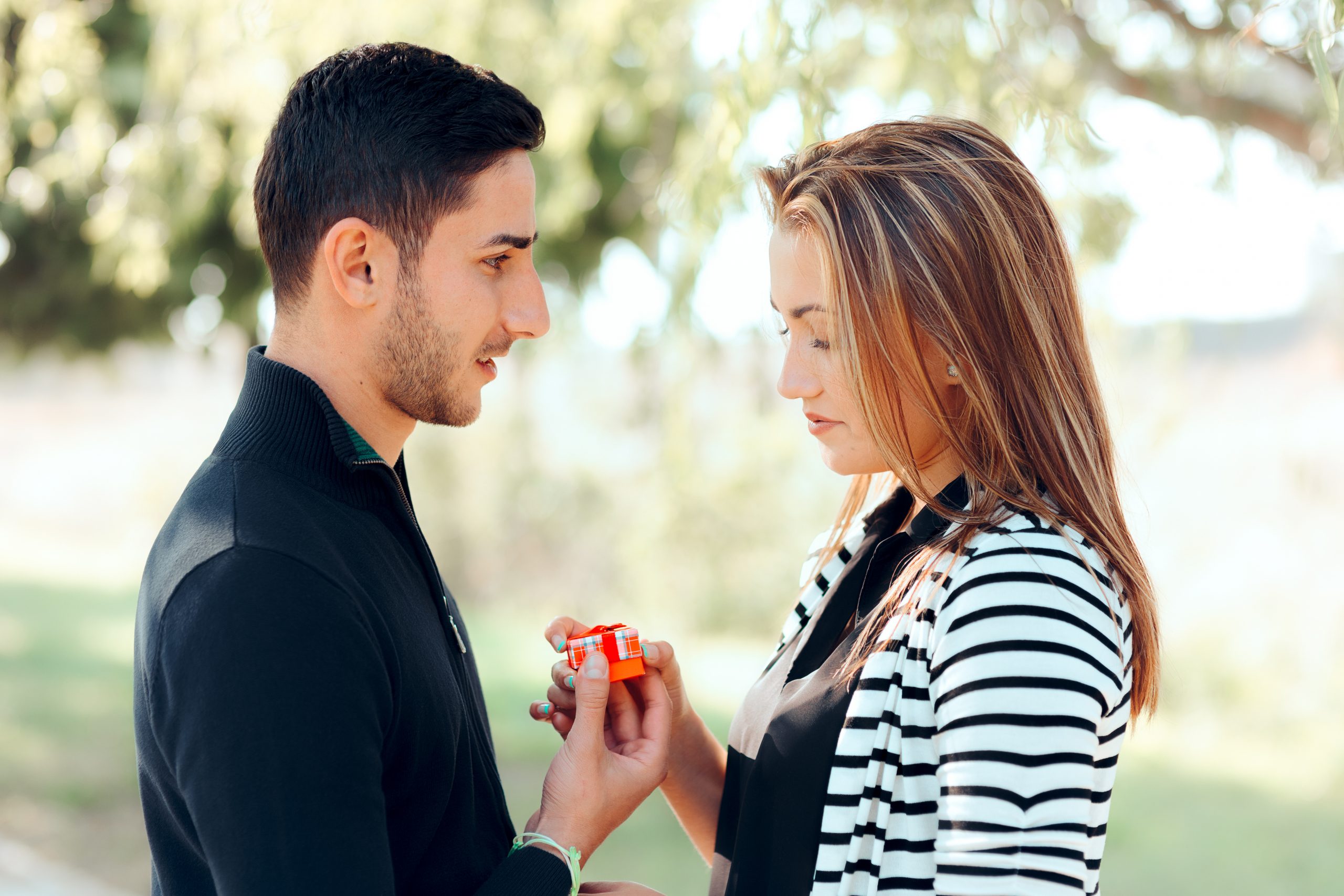 Not that you expect him to give you Gucci bags every other week, but this is getting ridiculous.

What’s with the cheap lipstick he gave you last week when you preceded that by getting him a $300 wallet?

In fact, you have been more than generous to him with the gifts you have given him in the past.

Money isn’t exactly gushing out of every orifice on your body.

You do work hard for your money.

And so does he.

Yet, it all feels so one-sided when it comes to gift giving.

You are no diva.

But, like the next girl, it would make you feel special if your boyfriend gave you a gift that cost more than what it would cost to buy some cheap fast food with a few extras thrown in.

Receiving so-called “small” gifts makes any giving woman start feeling less than or less special after a while.

You aren’t asking for anything you aren’t giving.

If there were an imaginary court of fairness, it would be on your side.

Taking this issue personally is understandable, but consider the possibility that your boyfriend has always been like this with his past girlfriends.

Sure, this doesn’t necessarily make you feel all that better, but, it at least lets you know that this isn’t something he chose to do to you alone.

It’s also important to examine his propensities as an individual.

Is he this frugal in his everyday life?

Does he get his clothes and furniture from thrift stores?

Does he refuse to go out to eat but for only very special occasions?

When you are both grocery shopping, does he frantically check the price tag of every single item you both place in the cart irrespective of how little it is?

Yes, that includes the chocolate bar you just slipped into the cart when you thought he wasn’t looking.

When a man is this frugal in his own life, he is going to extend the same unfortunate courtesy to any girl he dates.

He doesn’t look at it as his way of showing that you don’t mean all that much to him.

As far as he is concerned, you chose to be his partner, which would indicate that you approve of his lifestyle.

Why would he change it now?

Clearly, you didn’t quibble at his frugality when you were both still in the dating stage.

All of a sudden, it becomes a problem now?

By choosing to get into a committed relationship with him, you gave his lifestyle a stamp of approval.

This is why it would be incredibly difficult for him to start looking at the fact that he gives you “small” gifts as suddenly being a problem.

You knew how frugal he was from the get-go and still chose to get into a committed relationship with him.

Consider why you chose to still become his girlfriend while knowing his nature when it comes to expenditure.

Perhaps you thought that his behavior would change once you became his one and only girl.

This may have been your mistake.

A guy’s nature doesn’t suddenly change when he chooses to commit.

In most cases, he believes that you have accepted him for who he is and if anything, he commits to his nature that much more.

Now, in a scenario where you didn’t choose to commit to a man who you already knew was frugal, where in fact, he was the complete opposite until you both became committed, you have a much stronger argument.

Some guys do become that cheap boyfriend once they have landed the girl.

All of a sudden, taking you out to fancy restaurants is replaced with cheap takeout food and dare I say, McDonald’s?

All of a sudden the expensive bracelets are replaced with cheap, dollar store bangles.

Now, this would be unacceptable.

This is his way of saying he is now complacent and there is no more need to court you.

Giving you “small” gifts is simply a piece of a much greater issue.

Degrading his now committed relationship with you to one of complacency leads to much greater relationship issues down the road.

This isn’t about “small” gifts anymore.

This is about a complacency that easily makes him disregard your wants, needs and desires.

Though you are now both in a relationship, it should transition to one of continuous discovery and maintenance.

Your importance shouldn’t be now equated to that of an old pair of shoes that have been sitting in his closet gathering dust for years.

Talk to him about how you are feeling.

It is not about the “small” gifts.

It’s about something much greater.

If you actually take some time to examine the rest of your relationship, you would notice that there have been other areas of neglect that you haven’t been acknowledging.

You have been so fixated on the “small” gifts, you haven’t noticed other areas where he has chosen to further devalue his relationship with you.

When was the last time he gave you true recognition and brought grateful attention to something you do for him?

When was the last time he went out of his way to do you a favor that inconvenienced him in some way?

There is so much more going on here than simply his unwillingness to get you better gifts.

A reassessment of your relationship and where it currently stands is in order.

Have a talk with him now.

Unchecked, a boyfriend only gets that much more stuck in his ways.

He remains happy in blissful unawareness of your disapproval.

But, at night, while he sleeps soundly, you feel gutted and have to do everything in your power to hold back the tears.

Don’t let it come to this.