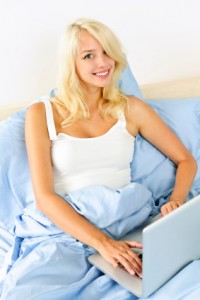 Avoid telling him that you woke up thinking about him as well if you truly didn’t.

In other words, don’t be afraid to be honest with yourself.

You don’t have to lie in order to make him feel better or make yourself feel like the good guy. Lying in this situation is a very avoidable, yet common mistake that people in your position make.

Listen, two people who are going out or getting to know each other often come to deeper levels of emotional attachment at different times.

You may not have woken up this morning thinking about him.

This doesn’t mean that you don’t like or care about him.

It also doesn’t mean that you won’t eventually reach this point.

So you shouldn’t allow yourself to feel bad if you aren’t feeling his level of emotional attachment at this stage.

In fact, you are in a much better position when you are able to acknowledge this and be honest with yourself about it.

When you can be this honest, you are looking at your relationship with him with a realistic understanding.

If you like him, there is a good chance that you will eventually wake up thinking about him at some point.

Just don’t allow yourself to feel strange or unhappy because you are not quite there yet.

So, don’t allow yourself to be tempted to respond in a way that you think he would want you to respond.

Simply send him a thank you text or crack some kind of harmless joke about it.

You don’t have to tell him that you woke up doing the same if you truly didn’t.

Now, on the flip side, if you did wake up thinking about him as well, you can acknowledge that and let him know.

You could be more specific and tell him exactly what you were thinking.

Perhaps you thought about something he told you recently that has stayed with you and may have put a smile on your face at the time.

Perhaps he did something funny recently that made you laugh really hard.

Perhaps there is something he told you about yourself recently that made you feel like he is truly insightful.

You can actually bring this up in your text back to him by specifically telling him what you were thinking about and asking him the same in return.

This is a way in which you can build an even stronger connection with him.

Instead of simply relegating his text to an emoji sign or a mundane phrase in solidarity, you can actually expand on it.

When he learns about what you were specifically thinking about him when you woke up, it can give him further insight into what about him you are attracted to.

This may encourage him to show you more of that side without the fear that he is overdoing it.

This is also true the other way around.

When he tells you what he was specifically thinking about you, you would be more knowledgeable about what he tends to like about you and you may start showing him more of that side of you.

This can really help with creating a deeper emotional connection with each other as you move forward.