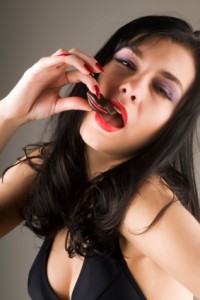 These men who date the same type of women may be afraid to try something else.

They get comfortable with what they are used to dating and may not be willing to take a chance on trying something new.

He may feel like it would be pointless to try something new when his type of woman has been working for him up until this point.

He may just not be willing to try another type of woman when he realizes that he gets everything he wants from dating the same type of woman.

When people get comfortable doing something, they tend to stick to it.

It becomes safe and secure.

They don’t realize what they could be missing out on by not opening themselves up to something new.

There is fear and uncertainty in even attempting to try something new and quite frankly they may feel like there is no need.

The problem with men who get stuck on dating the same type of woman is that this kind of behavior may ultimately work against him.

He may have had such a winning streak up until a certain point.

He is dating his type and he believes it will work out fine just as it always has, but all of a sudden something happens.

Perhaps she cheats on him or has a character trait that is unsettling.

He hangs in there for a while believing that things will get better as he can’t bring himself to believe that something that has worked so well for him in the past could be failing.

He may stick it out for too long.

The relationship may become abusive in some fashion.

He finally decides to end it but quickly gets into another relationship with the same type of woman.

As time goes on, this woman shows the same character flaws and he is dumbfounded.

He has always had good luck dating the same type of woman.

Why is this failing now?

In denial, he may end this relationship and quickly start dating another woman who again is of the same type.

He hopes that this one wins out and he can get back to how things have always been with his dates, nice and safe.

He can only go so far before he begins to encounter women he believed were the right type who turn out to have unfamiliar character flaws as the relationship progresses.

This is the danger that happens when we play it safe and always stick to a type.

It is important to be aware of this kind of danger because it can be very enticing due to how familiar and thereby comfortable it feels.

This guy may eventually learn this lesson and may decide to start dating different types of women at some point or he may never learn and will just continue making the same mistake over and over again.