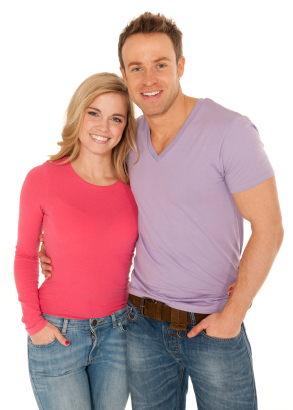 Show this hot guy that you are not trying too hard to make him commit.

A hot guy is probably going to be used to girls trying to make him commit.

He may be used to girls trying to get his undivided attention. They try really really hard to make that happen to the point where they take it too far.

She may act in a very clingy fashion always wanting to know where he is or what he is up to.

She may show jealousy whenever other girls are giving him attention and may hold onto his arm just a little tighter.

She may be constantly following his social media activity.

She may be constantly raiding his phone and the last few people he interacted with on that phone.

She may make it her life’s mission to be constantly trying to get him to hang out with her and her only.

A girl could do a lot of things to make a hot guy feel like she really wants to lock him down and force him to commit.

He may be used to this kind of behavior.

It may have gotten to the point that he doesn’t even allow it to affect him.

He knows how any girl he chooses to talk to or date will ultimately act when it comes to her desire to have him commit.

As a result, he finds a way to tune that kind of behavior out.

He just knows that it is going to happen and he is prepared for it.

If you were to do the opposite of what he is used to, you would be taking him by surprise.

Instead of constantly texting him trying to get him to hang out with you, you are out and about engaging in activities that you love or meeting new and interesting people.

You are not all over your phone hoping that he responds to your text or phone call.

You are really preoccupied playing tennis with your friends or learning something new in the new class that you have signed up for.

You are not preoccupied with thoughts of him that may be leading you to act in a clingy fashion.

He will notice that you are not hounding him with repetitive texts and phone calls.

This will make him curious as he will wonder why you are so different.

This now means that you are in his thoughts.

The more he is thinking about you, the more he wants to know what you are up to.

You will notice that he will begin to text or call you more.

You may not always be readily available to answer the text or return the call because you may be quite preoccupied in the recent kickboxing class that you had signed up for a few weeks earlier or whatever it is that you are busying yourself with.

So, you only get to see his message an hour or so later.

This whole time he has been wondering why you haven’t responded.

When you do and you tell him what you were up to, he realizes that your interests are diverse.

You aren’t spending every waking hour worrying about how many girls are giving him attention.

You are working on yourself.

This can make this hot guy want to prove to you that he is worth your time.

The harder he fights to get that time, the more time he commits to you.

Putting out this kind of effort over time can make him more emotionally involved which can easily lead to him being willing to commit.

He is now truly valuing your time and company. As a result, he may end up falling quite hard for you without realizing it right away.