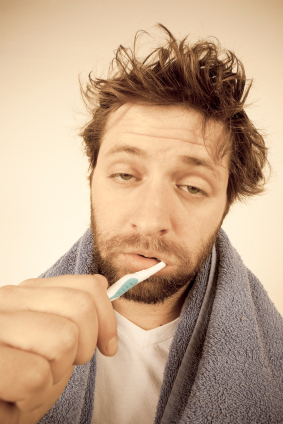 Getting your boyfriend to practice better hygiene starts with you ensuring that you don’t keep cleaning up after him or even engage with him when he is dirty.

If you simply overlook these things, he will keep doing them.

Even if you were to comment on them but still continue letting him have his way, he will not ultimately start practicing better hygiene.

So far, your words, if you have been using them, haven’t been working.

He is still not practicing better hygiene.

You have to take action.

If he lives separately from you, refuse to visit him as a long as his place remains filthy.

This is when you are taking decisive action.

This is when you are showing your boyfriend that there are consequences for his actions.

If he is not brushing his teeth, showering, or grooming himself, refuse to be intimate with him or allow him to visit you until he does.

You see, you have to begin taking action.

Simply telling him to do better and practice better hygiene isn’t enough if you have been doing it and he hasn’t been following through.

In his mind, those are just words.

He will tell you what he knows you want to hear.

Sure, he will clean his house or start picking up his dirty clothes.

Sure, he will put away his cigarette butts and pieces of stale food that he has left sitting around.

Sure, he will brush his teeth and take a shower.

Unfortunately, he may tell you all of this because he knows that this is what you want to hear.

He may even do a very lazy job of following through.

Instead of truly cleaning out his space, he stuffs things away underneath beds or couches or into closets.

He never really did any cleaning. He just put some stuff away.

Instead of taking a shower, he throws some water on his face and puts on some cologne.

However, you aren’t going to fall for this because you are better than that.

Again, you have to let him experience the reality that there are true consequences for what he is doing.

Another way that you can make your boyfriend practice better hygiene is by being an example and giving him tips on how to do it in a way that will make it easier for him to stay with it.

This doesn’t actually mean that you do the cleaning or grooming for him.

You shouldn’t pamper him in this way.

If you were to do it, he would merely assume that you would continue and he wouldn’t put any real effort to do it on his own.

He may actually not know how to be as hygienic as he can.

Perhaps he grew up in a dirty household or has always been around dirty unhygienic friends.

Hence, he has learned this poor behavior through life experience.

A good way to show him how to be hygienic in a way that is easier for him is by giving him specific instructions on what cleaning products to get to clean his space.

The products should be easy to use and be highly effective in keeping dirt off for a while.

Your selling point here is in how easy these products are and how he doesn’t have to use them too often in order to maintain a clean space.

If it is his grooming, you should give him tips on the best way to maintain his personal hygiene in a way that is less time consuming.

You can find ways to make it easier for him to do what needs to be done.