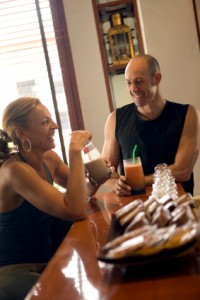 Simply ask him to do an activity with you on whatever day you have chosen.

It is always good to use your previous interactions with this guy as your guide.

If you have found something in common with this guy that you discovered through your messages with him, you can use that as your activity.

Now you know where to go.

Perhaps you discovered that you both have a love for a particular brand of ice cream or yogurt.

You could ask him via message to share that ice cream or yogurt experience with you on a specific day and in a specific time frame.

You really have to be as clear and obvious as possible. The problem that a lot of girls face in your situation is that they will be vague.

Instead of coming right out with a definitive activity, as well as a date and time frame for that date, they will be vague about their intentions.

They may send the guy a message asking him what his plans are for the weekend.

They may send the guy a message asking him about what he loves to do with his free time but they never take it any further than that.

They may even send the guy a message telling him where they will be on Friday just hoping that the guy will respond by telling them that they will try to stop by there as well.

In other words, they try to drop hints or make insinuations without asking the guy out directly and unequivocally.

Don’t be this kind of girl.

You will have the best results when you are clear with a guy about your intentions and what you want to do with him.

When you ask him out via message, be clear and concise.

Don’t use too many sentences. Also, don’t initially go off on some kind of tangent conversationally.

You can easily start going off on some tangent of a conversation because you are afraid of what you really want to ask him.

Instead of sending a short and clear message asking him out, you send him paragraphs of irrelevant discussion.

You initially begin with trying to have a conversation in the hopes that eventually, if it feels right, you will lead the conversation into actually asking him out.

However, you have already made a mistake in procrastinating.

You may have lost his attention by the time you are getting ready to finally do the asking out.

These are just delay tactics that aren’t going to help you.

I know that you may be nervous about doing this but remember that you will feel a lot worse if you later discover that he is dating someone else.

You never seized the opportunity to ask him out via message and now you have lost him.

Of course it isn’t.

You are better off sending him a clear message asking him out than procrastinating or trying to find the appropriate time.

The appropriate time is now.