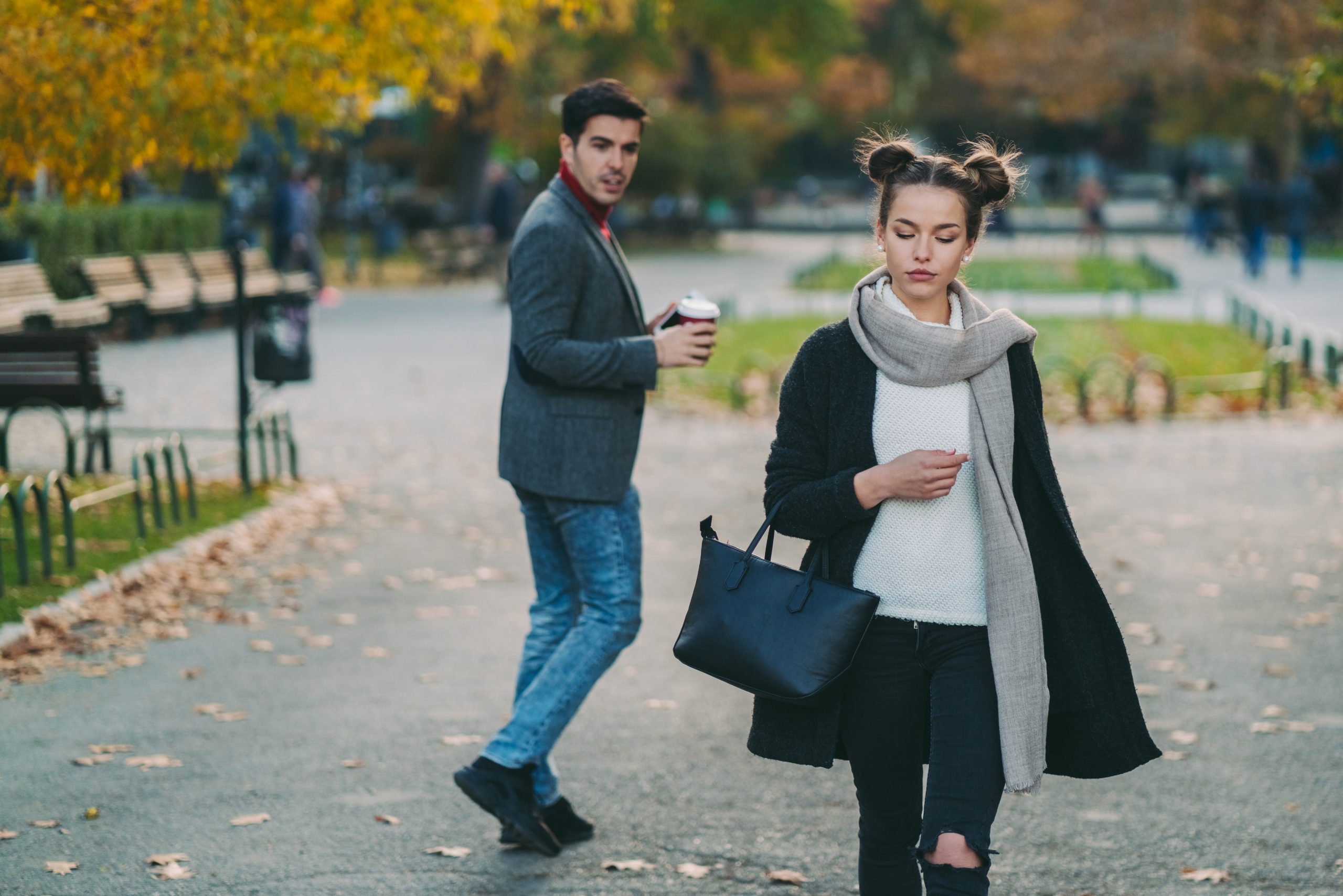 Most girls innately want to be approached in public.

They know how the dating game works, with the male as the expected aggressor when it comes to approaching and taking a girl out.

What girls have an issue with is a guy who is rude, disrespectful, or is not taking the hint that they are not interested.

This is where guys go wrong when approaching a girl in public.

They approach the girl in public and speak in a rude or abrasive manner as though they are owed the girl’s attention.

Rightfully turned off by his behavior, the girl chooses not to give him the response he wants.

She keeps walking or ignores him, or insults him back.

Regardless, she is turned off and isn’t in the frame of mind to talk to the rude guy.

Many women have enough of these negative experiences with guys, that they instinctively develop an imaginary protective shield whenever they go out in public.

The imaginary protective shield is constructed with a number of body language cues, such as, refusing to make eye contact with guys in public, keeping her distance and refusing to smile.

This makes her come off as though she doesn’t want to be approached by guys in public.

Her aloof behavior has been triggered, thanks to the negative experiences she has had in the past with guys approaching her in public.

To avoid these negative experiences, she has chosen the nuclear option to protect herself.

It’s not that she is against being approached by a guy in public.

Primarily, it’s the worry that a guy gets rude with her.

Decent guys who have every intention to approach the girl respectfully are taken aback with her body language.

Her lack of eye contact, scowl and aloofness sends the message that she has no interest in being approached.

Especially, when she is single.

She knows that her body language makes it hard for any guy to feel comfortable approaching her, let alone the rude guys, but she has to keep her shield up.

From time to time, she briefly lets down her imaginary protective shield, when she spots a guy she is attracted to.

Many a time, the guy doesn’t read on her signals.

For him to know unequivocally that she is interested, her imaginary protective shield has to come down completely for a sustained period of time.

That is unsettling to her.

It’s too much time for rude guys to move in on her.

In a controlled vicinity, where there aren’t anywhere near as many guys around, she is open to doing it, but not here.

A mall is too public, the shield stays up but for brief moments when she is hoping he spots her showing romantic body language directed at him.

She follows the same blueprint at a crowded train, bus or subway station, or a busy street or corner of town.

In the event you aren’t in a quieter area with her, the likelihood that she lets her shield down, even for a few moments, is slim.

Meaning, you have to step up to her without signals of interest.

Remember, she is open to guys approaching her in public, as long as they have a respectful approach.

Don’t stand around hoping to see a girl in public throw a bunch of signals in your direction.

Her shield is up in crowded spaces.

Instead, step up to her with confidence, introduce yourself and open up a conversation.

Don’t worry, as long as you are respectful, most girls respond positively, whether they are romantically interested in you or not.